By Richard Pendlebury for the Daily Mail

This is the shocking reality of the Taliban ‘amnesty’ for Afghans who worked for Britain. Ahmed’s shoulders, back and buttocks are covered in bruises where he was struck with a steel cable and rifle butts.

The photograph was taken by the Daily Mail on Monday, ten days after the assault in his home, in front of his terrified family.

His injuries have had time to fade. One can only imagine what they looked like shortly after being inflicted.

Ahmed’s ‘crime’ was to have worked as an interpreter at the British embassy in Kabul. His further misfortune was to be one of those who were inexplicably left behind by the UK Government following the country’s chaotic evacuation last month. 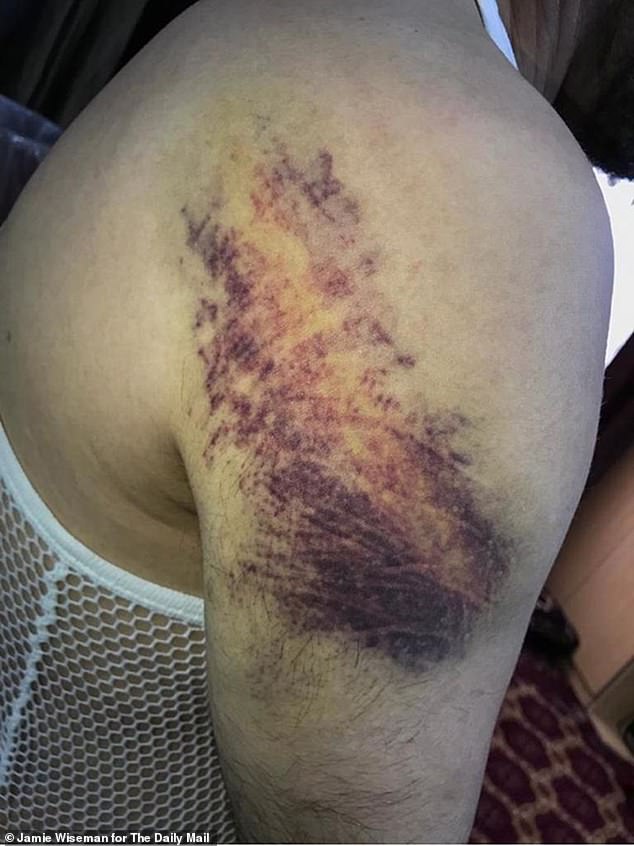 Ahmed’s shoulders, back and buttocks are covered in bruises where he was struck with a steel cable and rifle butts

I met Ahmed with his colleague Shoaib at a secret location. They are among five out of 24 British embassy translators who are still in Afghanistan. Shoaib is being hunted by the Taliban and has spent the past month in hiding. So far he has not been located. Ahmed was less lucky.

‘It was late evening and there was a knock on my door,’ he recalls. ‘When I answered it, two armed men immediately pushed inside and started hitting me.

‘My wife was screaming and my children crying. The Taliban were trying to pull me out of the door and my family were begging them to stop. Eventually they left me there, saying, “We will be back to punish you more”. Since then I have left my home and gone into hiding. My little daughter is especially worried. It has been traumatic for us all.’

More so, since his name was one of those leaked in a potentially fatal Ministry of Defence data breach last week.

The plight of embassy interpreters has been taken up by the Mail’s award-winning Betrayal of the Brave campaign. We revealed how the chief embassy translator with 17 years’ service for the UK was rejected for relocation three weeks after being shot in a Taliban ambush. He was one of more than 20 initially refused sanctuary because they were employed through contractors rather than directly by the Foreign Office. 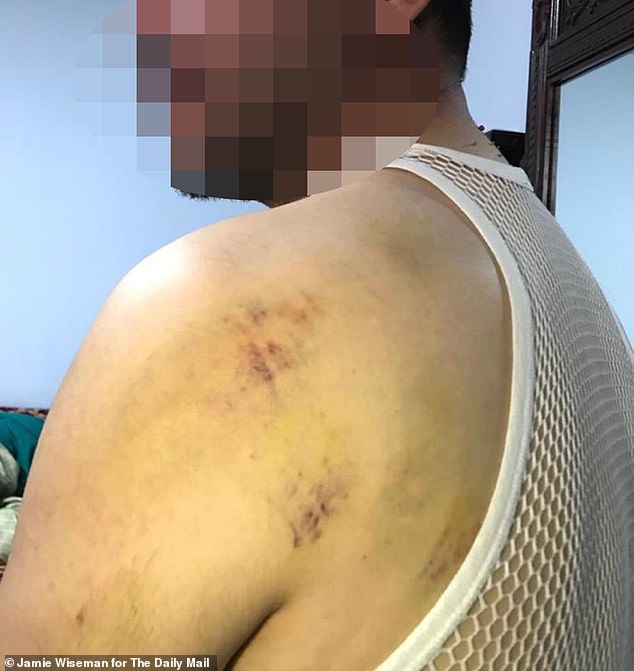 The photograph was taken by the Daily Mail on Monday, ten days after the assault in his home, in front of his terrified family

Within hours of the case being raised, then Foreign Secretary Dominic Raab ordered the decision be reversed and many are now in the UK after escaping on evacuation flights. But not everyone was rescued in time.

Ahmed and Shoaib were employed by the Canadian contractor GardaWorld, which supplied translators and guards to the embassy. Both had worked for foreign contractors for the past 16 years. They were marked men.

‘Earlier this year we applied for the ARAP (Afghan Relocations and Assistance Policy) scheme but were refused because we were not directly employed by the embassy,’ Ahmed says. ‘Then the policy changed and the British said every contractor at the embassy would be granted a visa.

‘In late July and August most of our colleagues received calls to say they had been accepted for evacuation. But I was not.’

His eligibility confirmation only came through on August 24 when the evacuation was almost over and security was worsening. It was too late. He tried to go to the airport with his wife and four children but was turned back by the Taliban.

He was then one of more than 200 embassy contractors and dependents bussed to the airport on August 26. They waited for hours in the heat until almost 6pm when the first Islamic State suicide bombs exploded among waiting would-be evacuees nearby.

‘Then the Taliban started shooting in the air and firing tear gas which came into our bus and it was hard to breathe,’ Ahmed says.

‘We got a call from inside the airport telling us to leave and find a safe place.’ Later that night the interpreters and families were again called to the airport – and again were not allowed inside.

Beaten and betrayed: Translators left behind in Kabul by the British are hunted by the Taliban following a shocking MoD security blunder

Read Beaten and betrayed: Translators left behind in Kabul by the British are hunted by the Taliban following a shocking MoD security blunder by Daily Mail

How mother-of-two Kristin Fisher LOST the paperwork for her drug charge after sticking it on the fridge - as the owner of Australias biggest makeup brand offers a glowing ...

Read How mother-of-two Kristin Fisher LOST the paperwork for her drug charge after sticking it on the fridge - as the owner of Australias biggest makeup brand offers a glowing ... by Daily Mail

Read The Corner by National Review

Read The Corner by National Review